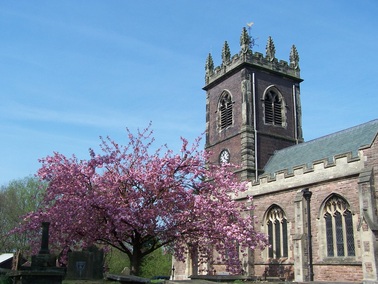 The church is named after the Patron Saint of Prisoners and has stood proud for at least 700 years. Twice during the past 200 years the main body of the Church has been rebuilt, but the tower remains much the same as it did when it was first built of hand-made brick in 1715. The former church building originally contained four chapels, each representing one of the parishes of Elton, Moston, Tetton and Warmingham. Before the building of the school in 1839, lessons were held in the lower portion of the Church Tower, a bit different from today’s lessons at Warmingham Primary School.  The churchyard contains many ancient gravestones, near to the rear porch stands the old village cross dating from 1298, for many years, no one realised that this was the original cross as a sundial had been placed on top of it.

The Church honours three World War One soldiers from Warmingham who gave their lives for their country. They are:
-Sergeant Richard Ashley
-Private William Boulton
-Private Joseph Henry Thomas

A brass plaque is located on the west wall of St. Leonards Church to commemorate them. Their graves are also located in the Church Yard, however their bodies lie overseas in France and Belgium.  If you come to visit, please feel free to pick up a short booklet that gives more information on the soldiers the village is so proud of.